Back in 2015: SDN, new fancy buzzword or a paradigm shift?

I started this journey in 2015, when at the Cisco Network Innovation Summit in Prague, I saw a presentation of Tim Szigeti about dynamic QoS with Cisco APIC-EM. That was the trigger for me, after a few years reading everything about SDN without anything concrete, now this was real! Finally, the network industry is evolving, and the network engineer job will inevitably follow.

I always thought that the network engineer job needs to evolve: since more than twenty years, copying and pasting into a CLI is the standard for network operations, and Notepad is the most common text editor… At the opposite, systems admins can seamlessly move virtual servers from one data-center to another in two clicks. Now this will change.

Where to start, what to learn?

First, my questions were: How do I get started with SDN and network automation? What should I learn?

Because I am working for a Cisco partner for enterprise networking, I had the opportunity to see webinars and do some workshops on APIC-EM. But it was only the beginning of this product, so it had not yet many features. Furthermore, I quickly realized that APIC-EM or the SDN controller in general is only a single link in the network automation chain, and I need to learn the entire chain.

At that time, I needed to focus on my CCIE R&S, so I put this subject aside until mid-2017. And I did well, because things have seriously evolved in two years.

So, in September 2017, I had the chance to make a very good internal training on IaaS, SDN, NFV and network automation basics. It was two day of theory and three days of hands-on labs on:

The labs part was tough and very interesting. And it helped me a lot to understand what exactly I must learn.

After this course, I made a list of the topics I wanted to learn:

First, I started with Python. Because this was probably the most difficult and longer part for me. Despite the fact that I made some bash/shell scripting in the past, my last real coding course was more then 25 years ago on Pascal and assembler (assembly). So, I am starting nearly from zero.

And learning how to use Git and GitHub at the same time was not a bad idea, because they go together.

My idea was to build a good enough foundation of Python to be able to read, write and debug a script. I did not pretend to become a developer.

Here are the tutorials and courses I made for that:

I started first with a Python tutorial on Sololearn.com:
https://www.sololearn.com/Play/Python

I found this tutorial perfect for someone like me, it starts from zero; the difficulty is increasing step-by-step and after each chapter there is a series of questions that challenge you on what you just learned. There is also an app for IOS and Android, to learn when you commute. And a mini-sandbox built into the website to try basic scripts. For some more advanced scripts they redirect you to Trinket.

Then, I made an online course at FutureLearn.com, on Python object-oriented programming:
https://www.futurelearn.com/courses/object-oriented-principles/

This is a 4-weeks course online, with a good mix of videos and practice. Useful to dig a little deeper into the Python’s objects.

To learn how to use GitHub, I made this nice tutorial: learn Git in 15 minutes:
https://try.github.io/levels/1/challenges/1.

I made it two or three times to be familiar with the commands. After, of course, I practiced and used Git as often as possible.

I loved this course! Every week, on Thursday, I received an email from Kirk including from 5 to 14 videos he made on Python, including theory and demo. Then, there are also useful resources and five to six exercises to practice what you just learned.

A new similar and updated course is starting May 8, you can register here.

Courses including more or other topics

After these courses and tutorials focused on Python, I was looking for trainings including the next topics of my learning list. Here is what I did:

In parallel with the end of Kirk’s course, I started the Cisco DevNet Network Programmability Basics Video Course. This is a 6-modules video course from Hank Preston from Cisco DevNet.

This course is totally free and very good! Each module has from 4 to 8 videos of around 30 minutes, combining theory and demo, on many network programmability topics.

I also spent a lot of time on Cisco DevNet.

Cisco DevNet is much more than a simple website. This is a fully integrated developer program consisting of a website, an interactive developer community, developer tools, discussion forums and sandboxes. There are tons of free and useful resources on network programmability, network controllers, APIs, and so on. These people are doing an amazing job!

Here are some interesting modules I completed:

But there are many more…

On Cisco website, there is a huge list of very good videos and webinars on Python, network automation, SDN and so on. For example:

This is a two hours of very good online and official Red Hat Inc. course on udemy.com, to learn the basics of Ansible for automation and configuration management. And it’s free: 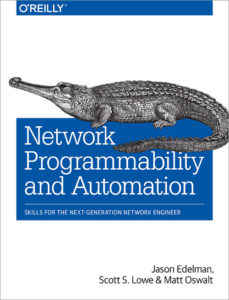 The book is organized in such a way that it is not necessary to read the chapters in order. Except maybe for the first two, which are an introduction to the more technical content of the following chapters. And this is exactly what I did.

At the time of writing this post, I have not read the entire book yet, but I recommend this book to anyone who wants to start learning network automation.

My goal was to learn network programmability, but, in addition, I also needed to renew my current Cisco certifications before June 2018. So, I thought about the Cisco Network Programmability Design and Implementation Specialist exam (NPDESI).

Taking the Cisco NPDESI 300-550 course (and exam) was, for me, probably the best way to combine my current learning goals and renew my existing certs, so I signed up for the course.

The overall course content was very good, and there are many topics to see in only five days of theory and labs.

The only negative point is the course is spending too much time on some subjects, like Python basics and ACI architectures for example, and not enough on other, like the topics of the last day.

For example, on the first day, we spent the afternoon reviewing Python basics, like data-types, booleans, lists, dictionaries and loops. Can you learn Python in three or four hours? The answer is no, of course. Furthermore, basic knowledge of Python is one of the prerequisites of the course. So why did we spend four hours on this?

Same on Thursday, we spend a lot of time on Cisco ACI and APIC. It seems like Cisco is trying to promote ACI fabrics during this training.

On the other hand, Friday’s subjects were seen in a very superficial way. We saw Ansible very quickly and nothing about Jenkins for example.

But apart from that, I repeat, the course content is very complete, the student guide is very good, and there are a lot of labs.

This exam gives you the  Designing and Implementing Cisco Network Programmability specialist certification, but it is also valid to renew any CCNA and CCNP level certification.

This is a typical Cisco written exam. The questions are not all very clear and some others are not covered at all during the related course. Since the list of topics is very large, the exam is difficult. I failed my first attempt for 12 points, studied again, and passed the week after.

I am now: Cisco Network Programmability Design and Implementation Specialist

Next steps and conclusion

If I go back to the list of topics that I wrote in September of last year, I can say that I learned and practiced many of them. I have now a solid foundation to continue on this path, but I do not pretend being an expert in any of the topics below:

Now, I must continue practicing and experiment what I have learned during the last year, and I also have to keep learning new things.

First, I will finish to read the Network Programmability and Automation book. Then, I already scheduled many sessions related to network automation and programmability at Cisco Live US. And last but not least, I will try to use these new tools as soon as I have the opportunity in my daily work.

My conclusion: Constant learning is the key in this field.

20 Thoughts to “My journey to network programmability and automation”

This website uses cookies to improve your experience while you navigate through the website. Out of these, the cookies that are categorized as necessary are stored on your browser as they are essential for the working of basic functionalities of the website. We also use third-party cookies that help us analyze and understand how you use this website. These cookies will be stored in your browser only with your consent. You also have the option to opt-out of these cookies. But opting out of some of these cookies may affect your browsing experience.
Necessary Always Enabled
Necessary cookies are absolutely essential for the website to function properly. This category only includes cookies that ensures basic functionalities and security features of the website. These cookies do not store any personal information.
Non-necessary
Any cookies that may not be particularly necessary for the website to function and is used specifically to collect user personal data via analytics, ads, other embedded contents are termed as non-necessary cookies. It is mandatory to procure user consent prior to running these cookies on your website.
SAVE & ACCEPT